Free.ca is a directory of the latest Canadian contests, freebies, coupons and more. Its much like Free Stuff Finder (in fact they have much of the same content), but more streamlined, less detailed oriented and way more advertisements.

I found the way they formatted and styled their content to be rather irksome. Everything is lumped together in the same format regardless if its an advertisement, random blog post or the actual giveaway/contest being showcased - I like to refer to this as "disguised content". In other words, you have to pay attention to what you're clicking on or you'll spend a lot of time back-tracking.

With that said, there is a pro to this site, it has lots of user feedback. User feedback is great for prize claimers for many reasons, but mostly to find out whether the product is worth the effort in claiming and to provide a sort of technical support group for when you come across a glitch. For example, sometimes the way you type in your postal code will result in an error, seeing feedback from others who have had this problem generally results in some sort of solution being posted (like not leaving a space, or leaving a space in a specific spot, etc.). Also user feedback can notify you of scams or sites that are riddled with viruses and so forth.

I've added free.ca to my bookmarks as one of the sites I will return to, primarily to check for new content that can't be found on any of the other sites I frequent.
Posted by Unknown at 6:00 AM No comments: Links to this post

I received a trial pack of Jamberry nail wraps from an old childhood friend and current Jamberry Consultant (check her page out here). My cousin is also a consultant (view her page here). I've been tempted to become one myself but was a little hesitant mostly because it looks like a product that's too good to be true. Like all products it has its pros and cons; most of these are in comparison to standard nail polish:

For a first time nail wrap user, I'm definitely happy with the result and even though my first attempt at applying was a little fiddly, I will definitely consider purchasing a full sheet and going to town on mine and my daughter's nails.

Posted by Unknown at 12:58 PM No comments: Links to this post

Love the name, but not a fan of the content layout. Maybe its the Graphic Designer in me, but wow this site is busy - at least until you get used to it. Once you adjust to having to scroll halfway down the page to get to the actual content, its not so bad. Much like Free.ca you have to pay attention to what you're clicking on because many of the advertisements (pro: they at least put headers on the ads!) are disguised as content within the page. Another pro, they seem to update their content daily, unlike their competitors who claim to but really only post once a week or every few weeks. Even though they have much the same content as other directories like Free Stuff Finder they do seem to have more variety for each topic such as store offers, contests, print coupons, mail coupons, etc. I'd say after you get by the visual chaos its a fairly decent site and one I will bookmark and return to regularly for the latest deals.
Posted by Unknown at 9:00 AM No comments: Links to this post

Last night we received our Hasbro VoxBox courtesy of Influenster containing Monopoly Junior for testing*! Our family was so excited to try it out that we had our #GameNight right away.

When you have two kids jumping off the walls with excitement to play a game that you've never played before and have never opened the box to... the number 1 most important aspect is: how fast can you set up the game and learn to play before the kids loose interest (or drive you crazy). Am I right?

Luckily, we managed to get rolling in about 2-5 minutes. The longest part was counting out the currency for each player (the paper money was stuck together making it hard to separate) and popping out the cardboard "house" pieces. The next time we play (which will probably be tonight!) it should be easier since the money has been played with and the gaming piece are all separated. Learning how to play the game may take longer if you've never played the classic adult version; the instructions are straight forward and we only had to refer back to them once or twice during game play. Honestly, its the classic adult game striped down for kids - that's all it is. It has the same concept, same goal, same layout, and so on.

Where it's the same:

The only thing I never liked about Monopoly, from a parent stand-point is all the "house" pieces and paper money. They're the first things to be lost or misplaced. If there was a way to make the houses stick to the board while playing and have their own little packaging container to return to after playing - it would make Monopoly gaming life so much easier!

This game is perfectly designed to keep little fingers and minds working in a fun family environment without being too cumbersome or frustrating. That is, if your kids can count with ease to 10, know a few of their colors (red, blue, yellow, etc.), know what a cat/dog/car/boat look like, and can read a few words they should have no problem playing this game with little to no assistance.

Pros: Easy to set up, easy for kids 5+ to play without much help, a classic game made for kids, fun for everyone
Cons: Lots of little pieces to loose, only 4 people can play at a time, the game can go on for a long time depending on how you play it (ex: if you play to the last man standing it can take longer than quitting after the first person looses their money - but that's all personal gaming style.)

Posted by Unknown at 10:56 AM No comments: Links to this post 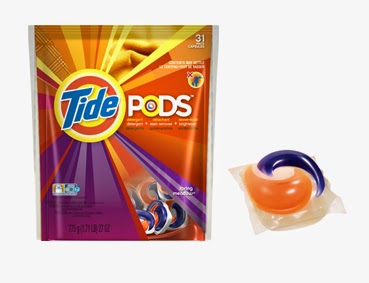 I received a sample pack of Tide Pods from P&G the other day. It arrived just in time too! One of the cats pee'd on our bed comforter and it just happened to be a day that we were all out of our usual laundry detergent (we use Cold Water Tide). My main concern was I didn't want it to just mask or cover the smell (of the cat pee) but get it out as much as possible. My other concern was staining - some detergents if they don't dissolve before you add the clothes can sometimes leave stains on them. When I pulled the comforter out to put it in the dryer it had a very refreshing scent (no lingering cat pee smell) and it was stain free. So I'm very happy with the outcome of the product. I don't know if we'll switch from Cold Water to Pods, the last time I checked it wasn't economical for our family. We do 1-2 loads a day and up to 4 on bad days. With the Pods you have to use 1-2 depending on the size of the load (1 for small, 2 for large), whereas with the powdered or even liquid versions you can customize the amount used. In other words you don't always have to use the recommended amount you can "conserve" the product; with the Pods you have to use at least 1 regardless of the load. Prices for Pods are reasonable, but just not beneficial for our family to switch to. I would use Pods again, especially in a pinch or when I want my clothes to smell extra fresh.
Posted by Unknown at 9:00 AM No comments: Links to this post

I signed up to Swagbucks the other day and wow, there's a LOT to sift through. This is definitely not a user-friendly site for those who are "website challenged". My mom would quit on this site in a heartbeat - and I wouldn't blame her. I'm overwhelmed and I've been using, building and viewing websites for over 15 years. There's just soooo much "stuff" and no clear direction.

With that aside, it's basically a site where you earn tokens (or swag bucks) which you can then turn in for prizes / rewards which are mostly in the form of gift cards in the price range of $10-$100 value from shops like Amazon, Foot Locker, iTunes, Facebook and more. I even noticed you can make donations to charities like the Red Cross and UNICEF using swag bucks, which is nice for those of us who lack credit cards for making online donations :)

I ended up downloading the Chrome browser extension just because its one of those sites that you literally have to spend all day on participating in as much as possible in order to rack up enough points to be able to buy anything with. I mean, I've been at it for about 3 days now and have only 80 points, most turn in items require an upwards of 1-8k worth so I have a ways to go before I can cash in on some goodies.

Unless you have a lot of spare time to dedicate to participating or don't mind waiting an eternity to be able to cash in, it is kind of a waste of time for the average person. If you do sign up, I would definitely recommend getting the browser add-on. It helps notifying you of special events for bonus bucks and keeps track of how many bucks you've earned so far.
Posted by Unknown at 8:00 AM No comments: Links to this post

I'm a newer user (within the past month) of this website: Free Stuff Finder: Canada, and so far its proved to be very helpful in finding the latest freebies, coupons, contests, giveaways and more.

Its one of those websites that you add to your bookmarks and check it every now and again to see what's new and happening in the world of free stuff. Its updated quite frequently, at least a handful of new posts per week from what I've seen so far. They go as far as informing you of what the giveaway includes, how to access it, what you need in order to participate in it, any special info (like if you have to sign up to participate or if you can just go to the site and cash in) and even let you know when the promotion is out of stock or expired.

As far as being a hub for a collection of the latest freebies, its by far one of the better sites I've come across. Its easy to use, easy to read and easy to get to the freebies, contests, coupons and giveaways of your choice.
Posted by Unknown at 7:00 AM No comments: Links to this post

Where to Find Us Online